St Louis – Bush Stadium at Sunset by Joe Penniston is licensed under CCBY2.0

SUITABLE FOR  Upper Intermediate (B2) and above

TEACHER’S NOTES    (Click here for a pdf of the Teacher’s Notes.)

Show the class the word cloud below and ask them to name the sport. 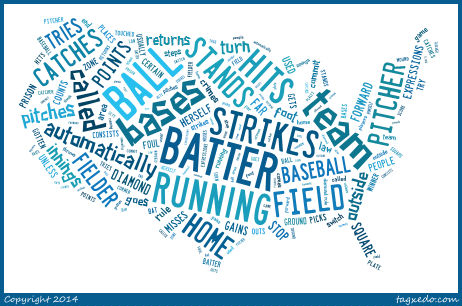 Divide the class into four groups – A, B, C and D – and organise the groups in a rough circle around the room. There must be at least one person in each group who has a mobile phone or tablet with an internet connection. If you have a big class, you can make eight groups. Display this image and ask them to tell each other what they know about baseball – its vocabulary and its rules. They can use mobiles or dictionaries to look things up.

Ask each group to nominate one member, who must then go and “visit” the next group in a clockwise direction. The visitor and the group compare ideas. Afterwards, the visitors return to their respective groups and give some feedback.

Display this page from the Oxford Advanced American Dictionary so that groups can check their predictions.

Tell students that it’s traditional in baseball to have a ceremonial opening pitch, usually performed by someone famous or to celebrate some special event. Tell them that they are going to watch a different YouTube video each showing ceremonial pitches which are famous for being unusual in some way. Each group has to watch their video and work out how to describe exactly what happened in English.

Get each group to watch one of the videos below. In class, you can do this by getting students to look for the video on YouTube using the descriptions in italics as follows:

Give students time (and some help!) to come up with accurate descriptions of the scene.

Once they’re ready, reorganise the class into four new groups where there is a representative of each original group in each new one, i.e. the new groups are made up of at least one person each from A, B, C and D. There must be a mobile phone or tablet with an internet connection in each new group.

Each person now takes it in turns to show the opening scene of their original video, being careful to stop it before the ball is thrown. The others have to guess what happens next. The person who showed the video then gives a point to the person who was closest before describing verbally what happens in the video without showing it.

Once all the opening scenes have been seen, they then watch each full video to see what actually happens. Now the group have to decide who gets a point for having given the most accurate verbal description.

Ask students which video they liked best and why. To round off the lesson, ask students to use their mobiles or a dictionary to first figure out the meanings of these questions – all containing sporting idioms – and then answer them.

In our second slightly egg-themed post this month, we take a look at some traditional foods that are eaten at Easter. First, we focus on collocation and explore words that can combine with chocolate, Easter and lamb. We then move on to watch a couple of videos stuffed with a mouth-watering mixture of Easter edibles. To finish off, students put all the vocabulary into practice before going off to do some food photography at home.

The videos for this lesson have disappeared. We can’t find them anywhere. If you come across them anywhere, please let us know!

Like last week, we’ve chosen another beautifully crafted video with spectacular images. Filmed by the production company Gnarly Bay, Choice is a visual poem which documents the filmmaker’s thoughts and emotions on a four-week holiday travelling around South Africa and Mozambique.

In class, students look at some collocations with the word choice, put them into practice in a speaking activity, and then work with the visuals before seeing the poem. Finally, we pull all the strands together when we watch the whole video and find out how the film got its name.

Our drink of choice at allatc is definitely tea  – and not just because it rhymes with the name of the blog! So we’ve decided to dedicate our posts this month to the king of hot drinks, starting with this classic ad. Feel free to do them all as a thematically-linked set, or to dip in and out as the mood takes you. But always with a drop of milk and a biscuit…

Be Wonderful and Wise

Our first post of the autumn term is based on an advert containing an assortment of food and cooking vocabulary, ranging from the familiar to the almost certainly unknown, unless students have spent hours in front of the TV watching Masterchef in English. Activities include observing, listening, vocabulary development, speaking, and to finish off, a song – if you haven’t had enough of it by then. All together now – chop, chop,chop,chop, chopping…….

Chicken or the Egg

In this lesson students attempt to answer the age-old question about the chicken and the egg before watching a video which has quite a different take on a chicken and egg situation.

The film was made by Christine Kim and Elaine Wu and you can find out more about it on the Chicken or the Egg Facebook page.

This time last year John Lewis released a sentimental advert featuring a boy who can’t wait to give his parents the perfect Christmas present, and we based a lesson plan on it. This year’s version is in a similar vein. Featuring a love-struck snowman, the ad contrasts nicely with the more irreverent take on the traditional Christmas commercial from the makers of  the infamous Scottish soft drink, Irn Bru, which we’ve also included in this activity.

Click here to find out what we did with it.

All at C
Create a free website or blog at WordPress.com.