In our third post this month, eggs get another mention, a word cloud makes another appearance, and there’s a focus on words with multiple meanings. This time we use footage from the BBC documentary series Wild Caribbean. In the clip we see a cast of crabs (or a consortium of crabs, according to some sources) travel from land to sea to lay their eggs. And this week there’s no boiling, scrambling, poaching, frying or chocolate eggs to make starving students faint with hunger during classes at lunch or dinner time. 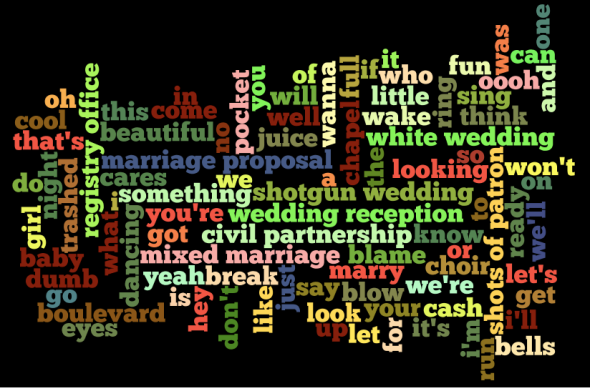 Could this be the best marriage proposal ever? Featuring the world’s first live lip-dub proposal, this video has gone viral with millions of views since it was uploaded less than a month ago.

Students start the lesson with a vocabulary and writing activity using a word cloud made up of the lyrics to Marry You before listening to the song Bingo-style. They then work together to design a video to accompany the song, going over the top on the romance, and present their ideas to the rest of the class, who vote on the most romantic (or the most clichéd). Lastly, they get to find out what the world’s first live lip-dub proposal is and go home to listen to the song again on the expert setting at lyrics training

“Gritting my toothless gums in seething RAGE is what keeps my skin taut.”

“That’s what really annoys me about Twitter. Can’t do the disappointed sigh and the threatening silence just becomes –  silence”

“In the grand World Cup of life, I am of course in the group of death”.

These are just a few of the things Granny O’Grimm has to say on her  Twitter page . So when she reads Sleeping Beauty to her granddaughter, you can probably guess that it isn’t going to be the traditional take on the story.

In this lesson, students talk about some traditional fairy tales before watching the Oscar-nominated Granny O’Grimm’s Sleeping Beauty. They then use their imagination (and / or memory)  to fill part of the story with adjectives before retelling in the style of Granny O’Grimm. Finally, they write the subtitles in their own language. If their language is Spanish, they can compare their version with one that has already been put on YouTube, and if not, they could go to overstream to subtitle the clip in their L1.

For more about Granny O’Grimm, see her website . Granny O’Grimm’s Sleeping Beauty was written by Kathleen O’Rourke , directed by Nicky Phelan, and produced by brownbagfilms.

If you have never participated in an #ELTchat  discussion, these take place twice a day every Wednesday on Twitter at  12pm GMT and 9pm GMT.  Over 400 educators participate in this discussion  by just adding #eltchat to their tweets. For tips on participating in  the discussion, please check out this link and this video, Using Tweetdeck for Hashtag Discussions!

Apart from the odd occasion when I’ve lurked a little, this was my first #eltchat since I started using Twitter just over a year ago. It had been on my to do list, but with a class at midday, and dinner getting in the way of the evening session, there had always been a reason or excuse not to join in. When I saw this week’s topic though, I put dinner on hold, poured myself a generous glass of Rioja, and settled down to chat about using films in and out of class.

I’ve always enjoyed using video in class; I remember visits to the UK in the early 90s when I’d pore over the Radio Times, highlighting anything that sounded as if it might have even the slightest possibility of classroom use. At the end of my stay, I’d set off for the airport with my suitcase stuffed with tea bags, sausages, and videos where I’d recorded everything from documentaries to chat shows and sitcoms to soap operas, which I then topped off with films bought using my last few pounds at the duty free HMV. Since those days, the only thing that’s remained the same is my enthusiasm for using video.

So, on to the summary:

I say I settled down to chat – perhaps settle down is the wrong choice of word as that might imply I was relaxed; by the end of the chat, my brain was exhausted and buzzing and rushing and inspired. Especially inspired. The discussion was fast-paced and lively, ideas were coming from all directions, my fingers were tapping furiously, so much so that a lot of of my own tweets went over the 140-character limit and didn’t make it into the chat. Many others didn’t make it into transcript because I kept forgetting to include the hashtag, and it wasn’t until I read the transcript that I realised there was a stack of tweets I’d missed entirely.

Why (not) use films?

I got the feeling that everyone wanted to get down to the how rather than the why, perhaps because we all know that a well-chosen video can be motivating, inspiring, engaging, memorable, educational and entertaining.

As @theteacherjames says, “most people like film, why not use it?”  However, he recommends checking students’ tastes before doing a movie module in case you come across a student who isn’t at all interested in film.

Something else to take into account is the students’ culture, points out @Victor_K.

@Naomishema says that the beauty of film is that you can find something acceptable to ALMOST every population. If not, don’t use.

Just be careful that the film doesn’t become a babysitter, warns @SueAnnan.

What are they good for? Any guidelines?

Give me some activities, please!

“Trailers” were mentioned seventeen times, including retweets, so I’ve grouped  trailer-related activities together:

Activities with scenes from films

Which films  have worked well in class?

This is the section for anything that isn’t a film.

And what about out of class?

This is the section for anything that doesn’t fit neatly anywhere else.

@SueAnnan brought up the subject of copyright and responses ranged from “it’s a minefield” (@leoselivan), to “it depends on the country” (@vickyloras), “it’s a big issue” (@antoniaclare) to “good question” (@sandymillin). I suppose the best thing to do is find out the legal position wherever you are.

@teacherphili wanted to know if we were “talking about using existing films or creating our own with students?” Check out examples of some of his past projects here  http://t.co/p4YYyoqm
A topic for a future #eltchat?

Lots of great links were shared.

I’d sign off here, but there’s one more thing. …..The morning after #eltchat, I just happened to be on Twitter when @KieranDonaghy was sharing film-related link after film-related link, which I reproduce for you below. Thanks Kieran!

Film in Language Teaching Association (ask for an invite to join)
http://www.filta.org.uk/index-3.html

Movie Scenes for Classroom Use
http://larryferlazzo.edublogs.org/2010/02/01/the-best-movie-scenes-to-use-for-english-language-development/

How to Watch a Movie
http://www.filmsite.org/filmview.html

1000 Greatest Movies of all Time
http://www.theyshootpictures.com/gf1000_top100films.htm

Last but not least, I just happened to be on Twitter again the evening after the chat when @mkofab posted a link to this documentary site. Thanks Mieke!
http://www.journeyman.tv/

And that’s all from me. I’ll sign off by thanking everyone for a great chat, and congratulations to #eltchat on being nominated for an ELTon.

Thanks to everyone who came to my talk. As promised, here’s the handout:

In this lesson students watch two clips from the TV series The Walking Dead, which is based on the graphic novel of the same name. First, students predict the title of the TV series from the word cloud, which is made up of most of the words in this newspaper article . Then they test their observation skills by watching the first scene of the first episode and answering some true/false statements about it. The next task is to listen to a spoken description of a scene, note down key words, reconstruct and then watch the scene in order to identify the differences between the two. Finally, students talk about a scene from a TV series or film which sticks in their mind for some reason. 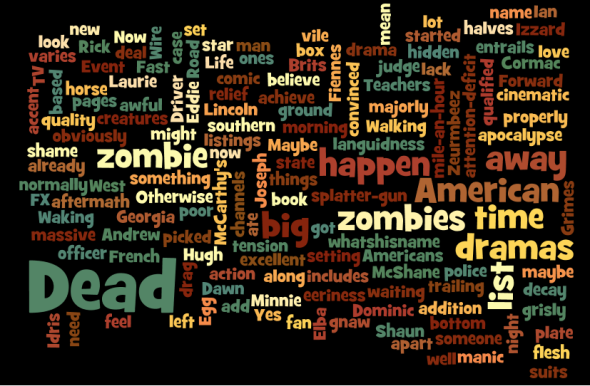 Here’s the handout from my talk at TESOL. Thanks to everyone who attended.